They say history repeats itself. Over the last few months my law background and the discovery of Dorothea Lange’s WWII photography have lead me to fear this may be true. Recent calls for a Muslim registry in our country made me think about the Japanese internment camps of 1942; with some registry advocates pointing to the WWII Japanese internment as solid precedent for their current plans (WashingtonPost.com). 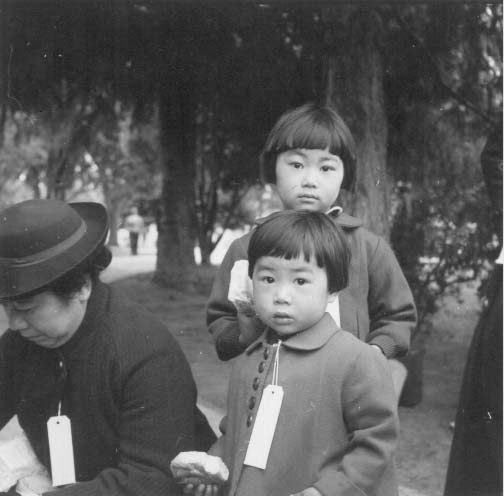 The Mochida children, of Hayward, CA, tagged like baggage, awaiting evacuation. One sibling holds a sandwich given to her by a local church group. Sourced from discovernikkei.org article.

I first learned about Japanese Internment as a law student reading cases for my Constitutional Law class in the 1980s. After Pearl Harbor, Franklin D. Roosevelt (yes, he was a Democrat and this action would cross party lines) approved  the idea of rounding up all people of Japanese descent—they were mainly on the West Coast— and placing them in relocation centers. There were 120,000 people interned, 62 percent of whom were United States citizens. (They were to be referred to as evacuees going to relocation centers, not internment centers or concentration camps; the word camp was forbidden.) As it turned out, Japanese Americans were not a security threat. The FBI and the FCC found no communication that would be considered espionage. At the time I was surprised to learn about the legal precedent and thought I would circle back to this topic someday.

That circle recently closed for me during the 20th Century Art class for my MFA  with the discovery of Dorothea Lange’s work. Images of this era appeared before me as I was working with fellow students on a virtual art exhibition. (Click here to view our project)

2031 Bush Street, San Francisco, California. Friends and neighbors congregate to bid farewell, though not for long, to their friends who are enroute to the Tanforan Assembly Center. They, themselves will be evacuated within three days. Sourced from Asia Pacific Journal 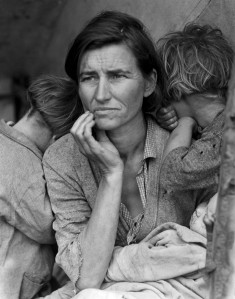 As it turns out, famous photographer Dorothea Lange, known for her Dust Bowl photographic series, was also hired by our government to document the Japanese internment process. As you may have guessed, Lange did not execute the work according to the specific instructions requested of her. Instead, she left us a provocative treasure in her images.

Lange, living in the Bay Area at the time, was hired to show the public that the military was not torturing or otherwise improperly treating the evacuees. At first she photographed the “assembly centers” in the Bay Area where the internees wore tags while being checked in.  Later, Lange headed south to  Manzanar, the first camp to open. She was forbidden to take photos of barbed wire fences, watchtowers, and armed guards. Lange was also followed by a government censor- who harassed and discouraged her from taking any photos of people. Despite this, she did find a way to depict the individuals and families who were forcibly relocated. 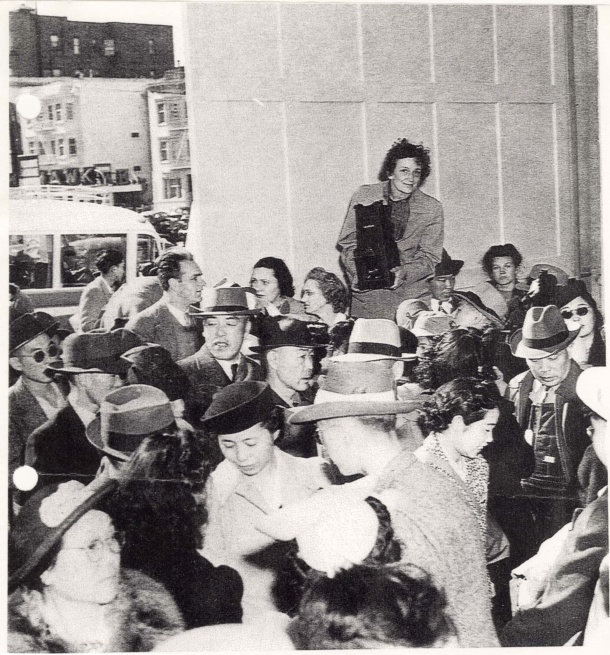 Photograph of Lange herself, photographing the internment. Sourced from The Asia Pacific Journal Japan Focus.

On July 30, 1942, the War Relocation Authority (WRA) laid off Dorothea Lange “without prejudice,” adding that the cause was “completion of work.” Lange’s experience in the past had been that her famous midwestern images, created under the Farm Security Administration (FSA), easily found their way into the public arena. These photos remain well-known even today, including “Migrant Mother,” above. The WRA impounded the majority of her photographs of Manzanar and the forced detentions, keeping them from public view. Luckily, and rather secretly, more than 800 of these images were later — without any announcement — deposited as a series in our National Archives.

Lange expressed her sadness in letters; at the time she believed her work was not effective in helping the people she documented. Yet her art survived to tell us all kinds of tales—Lange would be glad that her photos are now on public view. Lange has gifted us with her extraordinary way of seeing people. Over seven decades later her art is still relevant— and sadly telling. 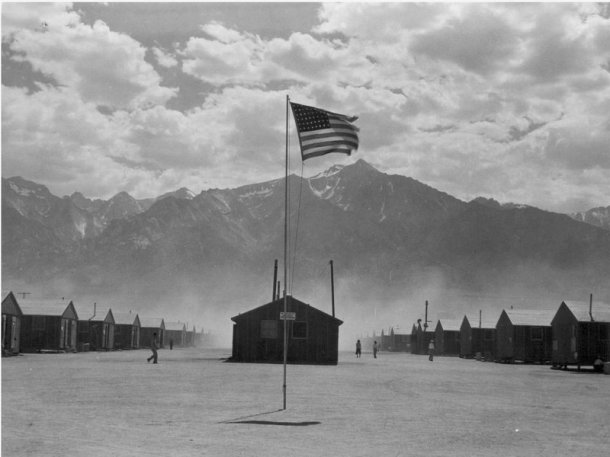 Scene of barrack homes at the War Relocation Authority Center for evacuees of Japanese ancestry. A hot windstorm brings dust from the surrounding desert. Sourced from NPR.org

For more information on this subject check out:

The Images and Stories of Japanese American Internment by Akiko Ichikawa at http://hyperallergic.com/204807/the-images-and-stories-of-japanese-american-internment

Finally, if you’d like to see my PAFA student virtual exhibition that included Lange’s interesting, nearly sardonic use of the flag in one of her photos visit Reframing the red, white and blue.

Dia:Beacon, in the fall. October 28, 2017. Train departs from the grand, Grand Central Station. Outside the window, a lone kayaker. The Hudson River is a deep gray blue. The trees dark orange and yellow; a yellow just this side of green. Greens are deep green; the sky is a clear strong, purple blue backdrop. […]

The Artist Under Surveillance PLUS a Guide to Holiday Shopping

And then I start thinking about what I can buy people for Christmas that is not going to spy on them, because I would not want a gift to spy on me. This might seem like a weird thought, but Christmas really is the spying holiday. First, Santa is watching kids all the time. That’s surveillance. The Elf on the Shelf? A spy…

A Feeling For Paint and Feminism

She does the labor of painting. She gets to make the art. She is the vessel. She wrestles infinity to the ground and makes it work. Place your body in relation to a Takenaga painting.   Delight in catastrophe.   Hover. Wrestle yourself to the ground.   Feel good about it. On a beautiful Berkshire […]