Dia:Beacon, in the fall. October 28, 2017. Train departs from the grand, Grand Central Station. Outside the window, a lone kayaker. The Hudson River is a deep gray blue. The trees dark orange and yellow; a yellow just this side of green. Greens are deep green; the sky is a clear strong, purple blue backdrop. 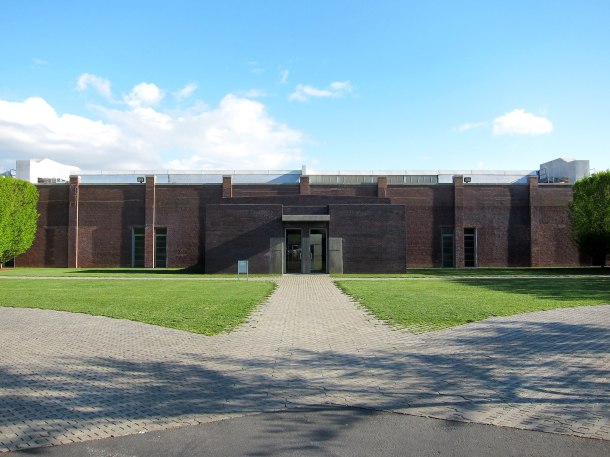 We were enroute on our first ever visit to Beacon, NY and the museum that had transformed it. On the train were groups of  young people in full REI-mode getting out of New York city on a Saturday, for a hike or a bike excursion near the Hudson. Once they disembarked at some of the trailheads near state parks the remaining passengers thinned to a typical NYC museum crowd. Lots of black clothing, art fashion and eyeglasses that draw attention to themselves. The day was perfect, port to port. (Dia:Beacon commissioned a soundtrack for the train ride!  Isabel Lewis: Hudson Line Mixtape ) Both the venue and its contents are quite stunning. This place is a retreat for large pieces and installations by “important” artists. It was built because there was no room elsewhere to properly and permanently show their work.

At a cafe table in the green green-yellow garden I motion a “please sit down” to a well-dressed couple looking for a place to sit. While attempting to speak French I find out that they live in Lyon, where my cousin lives, and that he is a writer. He and his wife were there for the opening of an exhibity by François Morellet: No End Neon I wasn’t familiar with Morellet but quickly find out that he is a big deal in France. As was later revealed, I was speaking with Hubert Besacier, a famous French art critic and gallerist.

From the café on to the museum.  As you walk across the grounds towards the enormous 300,000 square foot building (a renovated Nabisco container factory) you notice the impeccable grooming of the gardens. The trees are cut in perfectly even box shapes, mirroring the large boxy three-part space where the art lives. (Fun fact: the gardens were designed by artist Robert Irwin who also did the garden at The Getty Center.)

Here is a tip if you visit: Wear something modern — sleek, black or artful —to DIA:Beacon. It is a wonderful place to take photos of yourself and your friends. Take individual one person photos, mingled with individual works of art. They will be just right— you will have the context of your human size with the weight, mass, scale, and color of these breathtaking works.

What is the history of this DIA:Beacon? The official history is here. My colloquial, reductivist narrative is that back in the 1960s the European art world was lagging behind the US and that many of the artists represented here were the trailblazers. Back then the Europeans had, for instance, seen DeKooning and Jasper Johns at the Venice Biennales. They took their work in stride. But they had never seen the likes of Donald Judd or Dan Flavin or Sol LeWitt.

America began exercising art leadership. Europe had never seen anything like the weight, mass, and scale of a Richard Serra. They had not seen work that so carefully included us, the viewer, the subject. There is ample room to circle completely around the work on display at Dia:Beacon. You unconsciously compare your own size to it, from both up close and far away, you can get lost in the arty funhouse quality of it all.

Lost in the white hallways— that is what happened to us when we entered Excursus: Homage to the Square³ , 1998/ 2015 Robert Irwin’s hallways and small room-like spaces punctuated at regular intervals with striped neon lights.

Opened in 2003, Dia Beacon has the room and the pluck to keep important installations and sculptures, on view, permanently. There is room for big art here. There is room for light here.  Is this art minimal? To quote Dan Flavin, “One might not think of light as a matter of fact, but I do. And it is, as I said, as plain and open and direct an art as you will ever find.”

With its natural light and expansive spaces, Dia Beacon is NOT the white cube.  The work housed here is from the 60s forward when the “loft” sensibility was prevalent. In New York City American artists began using industrial objects, making work in large, industrial spaces.

Donald Judd said he had become tired of the way art was being shown in NYC. He was so bored with the white cube. He said, “It takes a great deal of time and thought to install work carefully. This should not always be thrown away. Most art is fragile and should be placed and never moved again.”  His wish has been honored at Beacon.

You will notice that the museum evidences no hierarchy. All artists seem of equal importance. What’s more the factory has been adapted to the art, not the other way around.

The author with a Robert Ryman painting

Who surprised me? Anne Truit and her columns. I was interested in her use of color, how her columns spoke with each other in odd tertiary colors. And her canvases, in pink, light blue and white – serene -with one pencil mark carefully added. Her canvases were shown in the same room as her columns— a compelling combo of painting and sculpture/installation.

Robert Ryman gets his own space to work with anything you ever suspected a painter might do with white,  just white. You linger in this space; this is a complete examination.

Dia:Beacon inspires us to look close. And then look closer. To see. The art is big but it does not overwhelm. The amount of art is — just right. Twenty four artists— carefully chosen for their importance to this kind of work— are represented. Judd would be delighted to know that they always will be there, presumably in the same spot since most so difficult to move.

Dia:Beacon, in the fall. October 28, 2017. Train departs from the grand, Grand Central Station. Outside the window, a lone kayaker. The Hudson River is a deep gray blue. The trees dark orange and yellow; a yellow just this side of green. Greens are deep green; the sky is a clear strong, purple blue backdrop. […]

The Artist Under Surveillance PLUS a Guide to Holiday Shopping

And then I start thinking about what I can buy people for Christmas that is not going to spy on them, because I would not want a gift to spy on me. This might seem like a weird thought, but Christmas really is the spying holiday. First, Santa is watching kids all the time. That’s surveillance. The Elf on the Shelf? A spy…

A Feeling For Paint and Feminism

She does the labor of painting. She gets to make the art. She is the vessel. She wrestles infinity to the ground and makes it work. Place your body in relation to a Takenaga painting.   Delight in catastrophe.   Hover. Wrestle yourself to the ground.   Feel good about it. On a beautiful Berkshire […]